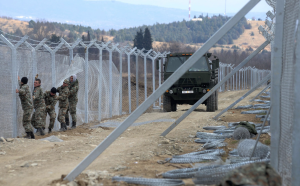 “Something there is that doesn’t love a wall,
That wants it down.”

That’s a line from US poet Robert Frost’s “Mending Wall,” a poetic lament of estrangement between neighbors. But it could just as well be the anthem of modern times when separation barriers between countries & territories are being erected at a record pace. There are now hundreds of the damn things. Many are to deter undocumented immigrants & refugees–like the wall on the US-Mexican border. The several Israeli walls are to enforce apartheid. All the walls are militarized & to enforce exclusion.

They’re made of steel, cement, razor wire, & many are electrified. They have watch towers, checkpoints, electronic surveillance & sensors, border patrols, & attack dogs. Some go on for several hundred miles taking out the ecology on the route, including migratory routes for birds & wildlife. The US border wall blasphemes sacred burial sites of Native Americans.

It tells you something when you take a look at the list of governments erecting the things: India between Pakistan & another between Bangladesh; Russia; North & South Korea; North Korea & China; Thailand & Malaysia; Saudi Arabia & Iraq; Saudi Arabia & Yemen; Iran & Iraq; Kuwait & Iraq; Northern Ireland; Egypt on the Gaza border; Cyprus; Spain & Morocco; Morocco & Western Sahara. The European Union has erected so many against refugees that German human rights activists have placed Berlin Wall memorial crosses at EU border fences to memorialize the deaths of tens of thousands of refugees because of EU policies.

The top photo are Macedonian soldiers erecting a second “protective fence” on the border between Greece & Macedonia. Protective fence against what? Refugees fleeing from war & bombing or from sweatshop economics? What’s to be afraid of? The bottom photo is the new Israeli wall being build in the Arabah valley along the border with Jordan.

The ‘something there is that doesn’t love a wall’ is the compelling, deep human desire for community, for solidarity, for bonds of human love. So the issue now is how can the best of the human heart overcome the savagery of neoliberalism that wants to tear us asunder & make us hate one another?

Tear down those damn walls! Solidarity is our anthem.