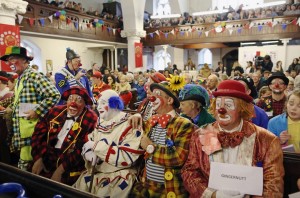 Media is having problems identifying whose national parliament this is. The US Senate has been ruled out since it has no one last-named Gingernutt. The closest is Senator Numbnuts. They thought the French Senat or British parliament good possibilities or even the European Union parliament. But throughout Europe no one’s willing to claim them.

There’s likely a reward involved for anyone willing to claim them as their elected leaders so try to put dignity aside long enough to grab the check. And let us know who they are before you go into hiding. We understand your dilemma. Consider the shame of living in the US during this election cycle.