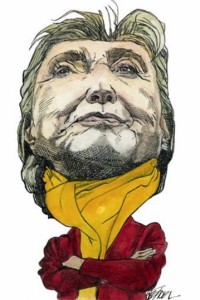 I am prompted to re-post this piece from February 7, 2013, three years ago, but apropos Hillary Clinton. It is an indictment of her politics & corruption but goes way too easy on her & leaves out her proclivities to grand larceny.

As Hillary Clinton exits the State Department the retrospectives begin on her legacy. There really isn’t much to say about a woman who took orders & defended US policy around the world–except we have a much clearer view of her venality & corruption. She came of age during the tumultuous 1960s & 1970s when millions of people were protesting for civil rights, women’s rights, & against the Vietnam war. She was a young Republican in that era & played no role whatsoever in social protest. In other words, early in her life she sided with the status quo & the powers that be–and that allegiance has never wavered.

Much is made of her intelligence & she is indeed a smart woman with an elite education–which she has used to enrich herself at the expense of others. Her most notable client as an attorney in Arkansas was Walmart whose fortune rests on sweatshops & exploitation. As Secretary of State & in league with her unsavory spouse she brokered commercial agreements making Haiti a sweatshop haven–& enforced sweatshop relationships with several other countries.

During her tenure at the State Department, the Arab uprisings erupted. Her role was to make sure the generals & dictators would stay in power & continue their relationship with the US Pentagon. Outside of a few ceremonial & perfunctory comments, she has never sided with the millions in the Arab countries fighting for democracy but has used her position to violently oppose them. She remains an ardent supporter of Israel in its murderous policies toward Palestinians, including the barbaric bombing sieges of Gaza. She defends US wars & drone bombing sieges & doesn’t bat an eyelash at the deaths & dislocations & human misery they are causing. Nor has she opposed IMF austerity policies against the people of Greece, Portugal, Spain, Italy & elsewhere–because US banks are the hegemonic force within the IMF & investors intend to make a killing on the massive suffering of others.

She traveled to Mexico to broker more compliance from the government as the southern flank of US immigration policy which includes the most barbaric violence against immigrants in an attempt to deter them. She has been part & parcel of lesser evil Obama’s immigration policies which have sundered families by deporting hundreds of thousands.

In short, there isn’t a damn thing you can say about her in praise. She’s complained about some of the disrespect & snubs she received as a woman politician. Regrettable but she’s hanging out with the wrong class of people–the barbarians who run the world. If she spent any time around the rest of us she’d understand our disrespect is based not on gender but on her massive corruption & indifference to human suffering. We only wish this was a final farewell & wouldn’t have to endure her as a candidate for president.

(Caricature of Clinton by Kerry Waghorn)