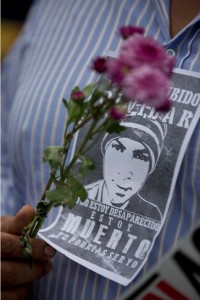 On September 26th, 2014, a busload of student teachers who were political activists was attacked by armed men in Iguala, in the state of Guerrero, Mexico. Reports about who attacked differ between the corrupt Mexican government who blame the police & parents of the students who claim, with evidence, that it was an action by Mexican soldiers garrisoned in Iguala.

Four students & three bystanders were killed in the attack; 43 students were disappeared & their whereabouts are still not known. One of the students killed was 22-year-old Julio Cesar Mondragon whose body was later found on an Iguala street with his face peeled off & eyes gouged out. The photo here is a poster of his face at a January 26th protest in Mexico City commemorating the 16-month anniversary of the deaths & disappearances & demanding the government of president Enrique Peña Nieto stop lying & trying to cover up the crimes. The disappeared students are known as the Ayotzinapa 43 & their families & human rights groups have waged a relentless campaign for justice.

Pope Francis is going to be visiting Mexico for 5 days starting Friday. In preparation for his visit, the Vatican released his video statement saying Mexico’s patron saint, Our Lady of Guadalupe, would not approve of the corruption, violence, drug trafficking, & crime cartels. Mexico’s Cardinal Norberto Rivera told media the Pope will call for justice for victims of violence & humane treatment for Central American refugees.

It’s estimated that in the past 7 or 8 years, up to 30,000 people have been disappeared in Mexico & up to 100,000 murdered. Much of the violence is attributed to drug cartels; just as much to the Mexican military which occupies most of the country as brutally as a foreign army. So the Pope is promising to address the most important questions in Mexican politics. Sounds so heartening but here’s where things get hairy.

The Pope’s itinerary will include some of the poorest & most violent districts of Mexico like Ecatepec, a poor, rough neighborhood on the outskirts of Mexico City where hundreds of women & young girls are disappeared or mutilated & murdered every year & most of the crimes are reportedly not investigated by authorities. Enrique Peña Nieto governed the state of Mexico before he became Mexico’s president.

So is the Pope going to Mexico & places like Ecatepec to address the issue of femicide & politically motivated murders–or is he going there to address homicide as a personal crime & chide the murderers to stop being evil? There’s some confusion in the media about that which needs to be cleared up. The caption to this photo of Julio Mondragon said, “On the eve of the visit by Pope Francis, homicides rose 9 percent in Mexico during 2015, according to government statistics.” The problem is that the murder of young Julio was not a personal homicide but a political crime. So maybe the Pope should skip the poor neighborhoods (unless he’s going there to rally for investigations of the femicides) & sit down with government officials who are criminally culpable either through neglect in personal murders or collusion in political murders.

According to an attorney for parents of the Ayotzinapa 43, they requested a private meeting with the Pope. Because of the political importance of their campaign which garnered international outrage & support, meeting with the parents would have been a compelling gesture of solidarity & put immense political pressure on the Mexican government to address justice for the Ayotzinapa 43. But Cardinal Rivera, talking with marbles in his mouth, said the meeting was declined because over 26,000 people had been disappeared & families of hundreds of other missing people had also requested a meeting. In such circumstances, he claimed it would be “very hard” to have a meeting. Just how hard is it to rent a hall & allow all of them to come to a private meeting to discuss one of the most important questions in Mexican politics?

One can defend the Pope’s political timidity & equivocations by saying he has to play politics if he wants to be allowed to enter a country. Let’s get real! If the Pope can’t speak his mind & publicly solidarize with the victims of political treachery, what’s the point of being pope? If you were sincerely, deeply committed to human rights, you wouldn’t accept a position that made you put a muzzle on your outrage. The Pope has got an international pulpit with millions of people he could influence to stand against political injustice & violence. Why doesn’t he use that authority? If he isn’t allowed to enter a country with a murderous regime, he could rally thousands at the border & make an international clamor for justice. That’s what a committed human rights advocate would do with the same resources.

It’s suggested the Pope could still agree to meet with the Ayotzinapa 43 families. Since he found time on his US trip to meet with the Kentucky county clerk who wouldn’t issue marriage licenses to gay couples, he sure as hell can find time. If he wants to. There are plenty of human rights activists in Mexico willing to brave a murderous regime who would handle the logistics, rent a hall, & notify those who lost loved ones to the gulag. If the Pope wants to address the issue of violence in Mexico, that is exactly what he will do instead of grandstanding treks into poor neighborhoods.

Our deepest respect for the families of the Ayotzinapa 43 & Mexican human rights activists who are determined to get justice for young men murdered because they were committed to a better world.