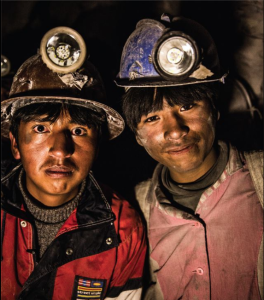 This is a post I wrote in November 2013 about who was behind the legalization of child labor in Bolivia. Chief among the NGOs advocating for it was Save The Children for reasons I explain here:

Some times your blood boils more at the idiocies of progressives than the treacheries of the right-wing. These two young boys (both under the age of 14) work illegally in a tin, zinc, & silver mine named Cerro Rico near Potosí, Bolivia. It is estimated there are over 3,000 child miners working in Cerro Rico; in just one year cited (2008), 60 children died from cave-ins & other accidents. Most of the miners are Quechua Indians. After nearly 500 years of non-stop extraction, the mine is almost exhausted & subject to frequent collapses because dynamite is still used to open new veins. In those 500 years, it is estimated at least 4 million miners have died from cave-ins, starvation, or black lung.

Bolivia has fewer than 11 million people; it is estimated that nearly one million of them are children who work full-time, with nearly half of those under the age of 14. Bolivian labor law prohibits children under 14-years from working though the laws are not enforced. Now Bolivia’s congress is slated to vote on modifying labor law to allow children as young as six to work. According to media reports, the proposal is being promoted by the Union of Child & Adolescent Workers (UNATSBO).

This is where the idiocy comes in. According to media reports, UNATSBO is being legally & politically advised & financially bankrolled by several NGOs. Any reporter or activist with the investigative skills of an honest 7th-grader would check out those NGOs to see if they might have ulterior motives. One of the NGOs is Save the Children whose corporate sponsors (including IKEA, Bulgari, & Unilever) should certainly give cause for suspicion. They boast that their chair is a former CEO of two Fortune 500 companies & their board members former government ministers, a previous UN leader, experts in children’s rights, healthcare, strategy, law, business, banking.

You don’t have to be a cynic to smell a big stinky rat. You just have to be able to put two & two together. Unfortunately many progressives laud UNATSBO as a step forward for child labor. Bolivia is a test case to legitimize child labor & most importantly to undermine adult labor & labor unions. They bring out the violins screeching tunes about UNATSBO ending exploitation of child workers–as if child labor could ever be anything but exploitation.

Children belong in school & on playgrounds–not crawling through dangerous mine shafts looking for metals to lard the coffers of mining corporations. It’s one thing for neoliberal predators to peddle rubbish about unionizing children; it’s a whole other thing for progressives to fall for it like Waldo the Dunce.