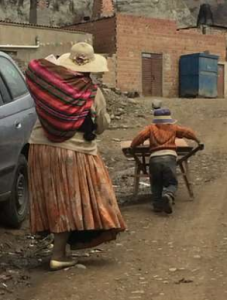 The report in TeleSur that “Bolivia Has Cut Extreme Poverty in Half Since 2006” must be read with extreme skepticism. Not least of the reasons is that TeleSUR is state-funded by several Latin American countries, including Bolivia.

It’s shabby journalism to claim that more than 2 million Bolivians “have left extreme poverty” & that the rate of extreme poverty was reduced from 38-percent in 2006 when Evo Morales took office to 17-percent in 2016. It’s even shabbier to cite the World Bank as an authority on the Bolivian economy when it holds Bolivia in a vise of debt bondage. Bolivia took out a $200 million loan from the World Bank in February whilst it is still repaying old debts.

It should be remembered that the World Bank, using deranged mathematics, has determined the poverty level at $1.90 a day. That’s $59 a month when a cheap one-bedroom city apartment plus utilities in Bolivia is about $190 a month.

Can the TeleSur reporter explain why disabled Bolivians have been marching 234km/145 mi on a highway to La Paz in wheelchairs & on crutches for a few years now demanding the Morales government increase social security benefits from a paltry 1,000 boliviano (£102, $144) a year to 500 boliviano a month (£50, $72)? Actually, can the reporter explain why Morales repeatedly turns riot police on the protesters?

One Morales economic measure to make the economy look better is the 2014 legalization of child labor from the age of ten. Child labor is ubiquitous in Bolivia from street peddling to brick factories to mining. Whatever its legal status in Bolivia, there is no enforcement of age limits or safety requirements for children. More importantly, whatever its legal status in Bolivia, child labor is an abomination & not one whit more progressive under a guy who calls himself a socialist.

A 2013 US Department of Labor report estimated 20-percent or 389,000 children between the ages of 7 & 14 are working full-time in Bolivia. But the estimates are as high as one million children, half of them under the age of 14. That is one in four Bolivian children working full-time to make Morales’ statistical charts look good & convince people he is a socialist.

Left analysts have been crowing for a while about the dramatic reductions in poverty all over Latin America by regimes they consider left-wing & who they claim have rejected neoliberal economic policies. One research institute claims over 60 million people in Latin American have been lifted out of poverty by these beneficent regimes & have cut poverty almost in half in Latin America. Any closer look at economic realities shows that to be completely fraudulent hogwash since one of the key features of neoliberal capitalism in Latin America is the massive expropriation of Indigenous tribal lands, the political resistance by them, & state military violence against them–including under Dilma Rousseff in Brazil.

The photo is a child worker in Alpacoma, Bolivia. Don’t try to tell us that little guy is over five-years-old, let alone ten-years-old.