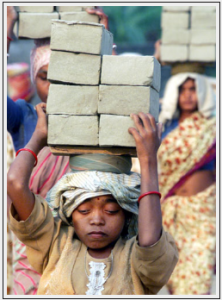 This is an article I wrote on child labor published in Wisdom Blow, January 8th, 2012, where I address the argument that child labor is necessary for economic survival rather than a scourge & abomination.

Few issues are as layered with obscurantism and deceit as child labor, beginning with the estimated number of child workers worldwide. The most commonly cited estimate from the International Labor Organization (ILO) is 215 million while UNICEF estimates there are 250 million. Others estimate as high as 500 million. Both UN agencies agree that millions of children between 5 and 11 years old work full or part time, with nearly half working full-time, every day, all year round; 70 per cent work in agriculture; 70 per cent work in a dangerous environment, with many sustaining extreme violence and coercion; child labor is common in most countries, including Europe and the US, especially in agriculture and sweatshops.

It’s not clear how these agencies determine their estimates since the figures have remained relatively stable for many years when every economic indicator suggests significant increases. In December 2010, the U.S. Department of Labor added a dozen new countries to the list of those that use child labor, including forced labor.  Governments are unlikely to accurately report child labor because they use it themselves or turn a blind eye to companies that do; they are unable to accurately report because there are no functioning monitoring agencies or inspectors established in any countries. IMF structural adjustment programs imposed on countries since the 1980s mandate destruction of labor laws and worker protections so it is highly unlikely money is expended to monitor child welfare and child labor.

The UN agencies also acknowledge that millions of child workers are not included in their estimates, particularly domestic workers and those in the informal economy (i.e., under the table, off the books, and not regulated by government). What is known is that the problem is rampant in almost every country in some form or another, including children trafficked for commercial sexual exploitation, military conscription, bonded labor, sweatshop labor, mining, manufacturing, farm work. There is no monitoring or reporting of accidents, health problems, and deaths as a result of children doing dangerous work.

While countries claim to have laws against child labor no survey of these laws is publicly available. Do they outlaw child labor or merely place restrictions on it? Moreover, as important as prohibition and protection laws are, compliance is by no means guaranteed when there are no monitoring or enforcement agencies. Some countries which have signed the UN international agreements against child labor are among the most notorious offenders. Governments do not prosecute violations of their laws but they do supply the riot police and security to protect companies employing children and suppress strikes by child workers.

In the US, child labor is illegal except in agriculture where it is used extensively with no protective laws covering children. An estimated 500,000 children work in US fields for 10 to 12 hour days, 7 days a week, without weight restrictions, subject to abuse, heat exposure, endangered by pesticides and toxic fertilizers, and paid below minimum wage. In 2009, a bill called Children’s Act for Responsible Employment (CARE Act) was introduced into Congress modifying conditions of labor, not prohibiting child farm workers. Without substantial public pressure it is unlikely to be acted on soon. Even if the bill is passed, there would be no monitoring inspections since OSHA (Occupational Safety and Health Administration), the office responsible for monitoring workplace safety conditions, has been effectively gutted for decades.

The widespread and growing use of child labor can only be understood within the framework of neoliberal economic policies and the structural adjustment programs of the IMF and World Bank, starting in the 1980s. These managers of international capital have mandated extreme cuts in social services and directed governments to slash funding to health, education, water, sanitation, and food subsidies. They have entailed a wholesale assault on labor laws and any restrictions on their ability to plunder for private profit. As adult men became marginalized in the labor force, women and children were forced to enter in unprecedented numbers to compensate the family income. In many cities, from New York City to New Delhi, everyone in the working family is required to work to support the family at minimal standards. This is not just a problem in countries mortgaged to the IMF although it is more acute in them.

The most rapacious factor in the child labor economy are the hundreds of US and European multinational corporations that prowl the globe hunting for the cheapest and most exploitable labor. There is scarcely an industry, a corporation or a consumer product sold that does not depend on child labor. Millions of children in manufactories and sweat shops make garments, electronics, rugs, bricks, toys, sports equipment, decorations. Multinational mining operations producing coal, diamonds, sapphires, gold, tin, extensively use child labor. Tobacco, and food items like vegetables, chocolate, nuts, sugar, coffee, and poultry depend on child laborers. Child labor is essential for the neoliberal strategy to destroy adult labor power and maximize exploitation for profit.

While the IMF and World Bank and the largest corporations on the planet are directly involved in promoting and utilizing child labor, none of this is addressed by UN proclamations or by most anti-child labor NGOs.  Of course, many of these NGOs have direct links through their funding sources and boards of directors to the very corporations they should be monitoring. The approach of the UN agencies and most anti-child labor NGOS to child labor is legalistic and moralistic, as if yet another UN proclamation or resolution or day dedicated to the issue will cease the practice. Reality and evidence mock this approach. Laws and educational campaigns are of course necessary but more importantly, the laws need to be enforced. Those responsible need to be exposed, prosecuted, and mightily fined. And therein lies the rub–especially when the enforcer is the accused.

Anti-child labor groups often echo the mythification peddled by the World Bank & IMF in their reports on child labor arguing that it is a necessity born of poverty and cannot be eliminated without first ending poverty. The World Bank attributes child labor to family patterns and cultures and promotes education as a solution. They attempt to dump the onus on alleged cultural backwardness rather than their own predatory political and economic policies. Child labor is not just the unfortunate consequence of poverty; and it certainly isn’t the result of cultural backwardness. It is the intended result of neoliberal anti-social and anti-labor policies which undercut adult labor, destroy union organizations and worker protections, force millions off rural lands and into cities, and mortgage entire countries to IMF structural adjustment programs.

Many NGOs, again following the lead of the World Bank, uphold the idea that compulsory education is the answer to the problem of child labor but they do not then address the destruction of public education by the IMF structural adjustment programs. These policy makers equivocate between total eradication of child labor and trying to regulate and ameliorate the conditions of child labor with many now peddling a scheme to organize unions for child workers. Equivocation here serves a political agenda since such exploitation cannot be mitigated; it can only be opposed and ended. It should go without saying that the developmental needs of children cannot be met by hard labor.

Beside excessive legalism, they approach child labor as a moral campaign and primarily a human rights issue. This has in some ways obstructed and not advanced the struggle against it. Child labor is a human rights issue and should be promoted as such but it is also a child welfare and a labor issue and addressing it with any hope of eradicating it requires a broad perspective, placing it within the framework of the neoliberal assault on adult labor and on social welfare. When anti-child labor advocacy groups limit the scope of their campaigns to human rights and ignore the political and economic compulsions of child labor, they essentially become fund-raising apparatuses with no discernible affect on the problem.

The fight against child labor is not an easy one and it is certain to be a protracted one but it begins with education and clarity on the problem. Much can be done to educate and expose corporate responsibility for child labor, to picket, protest, and boycott to bring attention to their crimes. Activists need to be familiar with the state of affairs in their own country, i.e., to know the laws, how many children work, and in what industries. In most countries, child labor has a distinct ethnic character, with racism a key factor. All of this information needs to be gathered and shared with international solidarity networks.

Ending this scourge requires organizing and defending unions for men and women, making them independent of governments, and eliminating their collusion with the political & economic agencies of neoliberalism. It means organizing women workers, outlawing child labor, funding education, food subsidies and social welfare programs that support family well-being. The lives and welfare of millions of children depend on our commitment. They have struggled alone long enough.