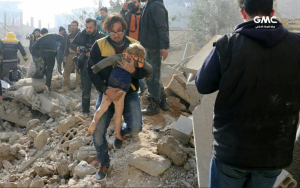 Indian Assad supporter Sabyasachi Chatterji posted the photo of Syrians who had frozen to death on the Syria-Lebanon noting that they were fleeing the war in Syria, without however mentioning they were fleeing Syrian & Russian bombing of civilians in eastern Ghouta or Idlib. Some of the comments on his post by fellow Assad supporters expose the political mentality & bankruptcy of those who defend Assad’s national sovereignty to bomb civilians, torture & hang political prisoners, forcibly disappear dissidents:

— “People are going back to Syria not fleeing anymore. Somebody used this family to try and make money smuggling them in the middle of winter!”

–“Hell, in terms of “seeing is believing” one could just look into how bad of a garbage crisis resulted in large part due to the influx of Syrians.”

–“This looks like a crime scene. It’s not natural for people or even animals to be stretched out like this if they were cold, on the contrary, they would be huddled, and anything that could be warn, ie plastic bags on the feet and stuff in the mysteriously opened backpack would be wrapped around them …. There’s something very wrong here.”

–“This is a mass murder scene, may be someone looted and killed them. So many people dying from cold at one spot !!!! And why they are not packed together in order to warm themselves, why their bodies are stretched and far apart, in extreme cold even animals know that they have to pack together in close group to keep themselves warm.”

Photo is what the Syrian refugees who froze to death were fleeing in eastern Ghouta.