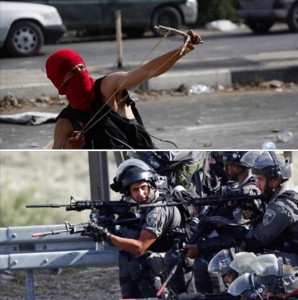 ABC news tonight reported on the Israeli rampage against Palestinians. But of course that is not how they presented it. As they report the story, Palestinians are running amuck in Jerusalem with knives. The parallels in narratives about Palestinian youth in Jerusalem resonate powerfully, & not coincidentally, with that about youth in the US Black community. Racism is of its essence.

One very striking comment in the report is that “disturbing videos circulating on social media are fueling the unrest.” What the hell does that mean? That showing images of Israeli violence against Palestinians is provoking Intifada!? Aren’t Palestinians too engaged in defending themselves against tear gas, grenades, & rubber bullets to be hanging out on Facebook or Twitter?

The sole concern about the gruesome images is that they counter Israeli propaganda passed off as news reporting. Just the fact that they mentioned it means they are concerned that the Palestinian side of the story is being heard. There’s another way to counter the lies & that is to join one of the solidarity rallies being held around the world demanding Israel stop the violence & end the occupation.

Photo on top is Palestinian activist at Howara checkpoint near Nablus, in the occupied West Bank; photo on bottom is Israeli soldiers he’s facing off with at Howara. We can all judge for ourselves who is inflicting the most murderous violence: those with slingshots? Or AK-47s?

(Both photos by Alaa Badarneh/EPA)