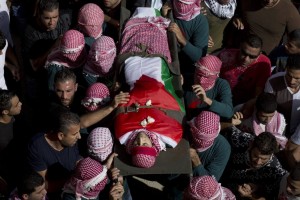 The media narrative explaining what’s going on between Israeli troops & unarmed Palestinians is absolutely appalling. Their simple-minded explanation for the cause of the “clashes” is that Palestinians were driven to a stabbing rampage by ‘anger over perceived changes to the status quo at Al-Aqsa.’ “Perceived changes” would suggest a difference with reality & that a misconception led Palestinians into initiating “clashes” with police.

Things move fast in media but not so fast that we forget what happened a few week ago at Al-Aqsa. Men under 50 years-old were refused entrance to pray on high holy days; there was a blacklist of women not allowed to enter; Israeli police moved in to the Noble Sanctuary with tear gas, grenades, & rubber-coated metal bullets; Israeli police escorted extremist thugs & “tourists” into the compound to vandalize while excluding Muslim worshippers; extremist goons with bats were allowed to menace Palestinian women without police interference; Israeli police launched a dragnet of Palestinian kids all over East Jerusalem & put the area under lockdown. Looks like Palestinian perception is on to something. But you’d have to be completely obtuse not to see that Israel is attempting to take over the compound to destroy it. When media plays stupid, it’s to cover for Israeli violence & occupation.

The second part of this narrative is the stabbing rampage part. Reportedly, the past few weeks have seen ‘the worst spell of street violence in Israel’ in years. But media reports only point to three incidents: one where two Palestinian men allegedly boarded a bus in Jerusalem & began shooting & stabbing passengers; a second where a Palestinian assailant rammed a car into a bus station before stabbing bystanders; in another one two kids from a settlement were stabbed.

According to the BBC a couple days ago, five Israelis have been stabbed, one critically, & four Israelis have died. Not really what you’d call a ‘spell of street violence.’ In fact, relatively calm compared to Friday nights at corner bars after college football games in the US. And the jury is still out on who the actual assailants were. It could be Palestinians affected by PTSD from relentless Israeli persecution & violence; it could just as well be Israeli agents provocateurs because now it has been exposed that Israel relies on them in the West Bank.

There’s a spell of violence all right but it is not coming from Palestinians with slingshots or shivs; it’s coming from Israeli police, soldiers, armed settlers & extremist goon squads armed to the teeth with tear gas, grenades, & assault rifles.

This is the funeral–at the Dehiesheh refugee camp near Bethlehem which was attended by hundreds–of 27 year-old Moataz Zawahara killed in one of those “clashes” where Israeli soldiers shoot down unarmed Palestinians.

May our young man Rest In Peace. Our deepest condolences to his family & friends. May we mobilize to demand Israel stop the violence & end the occupation. Build the economic, cultural, academic boycott of Israel (barcode beginning with 729)