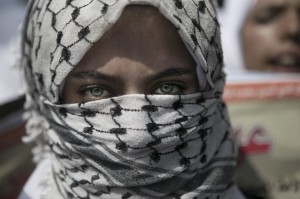 The caption to this photo was terse: “In Rafah, Gaza Strip, a Palestinian schoolgirl takes part in a protest after clashes between Israeli security forces & Palestinians.” Since their 51-day siege of carpet bombing in summer 2014, Israel has bombed Gaza nearly 700 times. But who knew Israeli troops had entered Gaza again?

The only report on this “clash” is in the right-wing Times of Israel. Just to be clear, a “clash” in this context is a media euphemism for ‘Israeli soldiers attack unarmed Palestinians & Palestinians defend themselves with rocks & slingshots &–in the interests of full disclosure–burning tires.’

According to the Times article, there have been a series of skirmishes at Rafah near the apartheid prison cage separating Gaza from Israel: a couple times where Palestinians “opened fire” on Israeli military vehicles patrolling the fence; a couple times when Gazans “rioted” & cut through the fence to enter Israel. The Israeli military reports these attempts were repulsed by firing tear gas & rubber bullets at the protesters–& by killing six unarmed Palestinians near Gaza City last Friday.

The Times also reports the US White House denounced Palestinian terrorism, European media is confused about who is attacking who, & UN chief Ban Ki-moon is overwrought with handwringing about Israeli aggression. Nothing like playing stupid about one of the most important political struggles in the world today.

Cut through the crap & hit the pavement with placards demanding Israel stop the violence & end the occupation of Palestine; & build the hell out of the economic, cultural, & academic boycott of Israel (BDS).