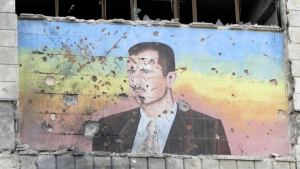 This isn’t a mean-spirited personal disagreement with either of them; on their own, propagandists don’t merit it but they speak for the Assad regime & the most reactionary political forces in the world. Nor is this a platonic dispute that can be handled in an Oxford Forum collegial kind of way.

This is a battle to defend the Syrian revolution involving millions of people against dictatorship & foreign military intervention. It is a historic battle that will decisively impact the Palestinian struggle against apartheid & colonialism, the future of democracy in the Middle East & reverberate around the world, strengthening or weakening struggles against war & crimes against humanity. That’s how important it is & is not an overstatement.

This is a political fight for the soul & integrity of the antiwar movement which leading activists are compromising by supporting dictatorship & abandoning the foundational principles of international solidarity so they can support Syrian & Russian bombing of civilians. No one gets to hijack the antiwar movement without a fight.

Some may find the polemics tedious & too tendentious. But not those who understand what is at stake.