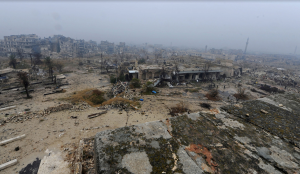 It’s hard to keep up with Vanessa Beeley in Syria: on Dacember 12th dining with Fares Shehabi, the Assad official for Aleppo, & fellow propagandists Pierre Le Corf, Andrew Ashdown, & Jan Oberg; on December 13th riding in with the Syrian Army to capture east Aleppo; then a day interrogating civilians trying to get them to finger the White Helmets. Singing for your supper keeps you busy in a war zone.

Next we know she’s in Damascus for a week where she spent an hour talking with Texas right-wing libertarian Ron Paul on his TV show. And then? No interviews, photos, audience with the great poobah Assad? Any meetings with regime officials we’d like to know about?

There were big doings in Damascus last week. Beeley was there on December 15th when Syrian authorities withdrew the journalist visa of Cecilia Uddén, the Swedish Radio Middle East correspondent, & forced her to leave the country for circulating ’false information.’ That would have concerned an independent journalist since Syria is ranked 177 out of 180 countries in the Reporters without Borders’ annual press freedom index. Beeley’s silence on this would suggest less independence & more propagandist hustler, especially when coupled with the photos of her with Assad & the over-the-top birthday wishes she sent him on social media.

Before she headed back to Aleppo she posted this about her day of interrogations in east Aleppo:

“The testimonies we filmed testified to starvation, wholesale deprivation of humanitarian aid, summary executions, torture & the use of civilians as human shields. Nusra Front were the overlord of the district, controlling an estimated 22 militant brigades funded, equipped & armed by NATO & Gulf states & condemning the Syrian civilians to a life of fear & imprisonment in their own homes.

“Women were married, raped & discarded en masse, children were imprisoned & anyone caught supporting the Syrian Government could be executed or imprisoned & tortured.”

She learned quite a lot in three days but of course she was embedded up the ass of the Syrian army. Beeley called her gruesome report the “very antithesis of the narrative being run by the corporate media” which she thinks favors the “jihadists.” It must have been the antithesis of what Cecilia Uddén reported too before Assad bounced her out of the country. The world looks forward to viewing those testimonies but we know it will take time for Assad’s propaganda factory to produce them.

Yesterday, Beeley traveled back to Aleppo accompanied by a Syrian army tank because she claimed there was increased ISIS activity along the road. Today she’s posting entire albums of well-dressed, well-fed jubilant children in east Aleppo celebrating their “liberation” around well-lit Christmas trees.

A week ago they were starving, war-traumatized & there was no electricity. Today that’s all behind them? In a chagrined tone she asks: “Why is western media painting the liberation of Aleppo as a grim doomsday scenario as the liberated citizens dance & celebrate in the street?” Must we remind her that for the first time western media & Beeley’s propaganda agreed on the doomsday scenario in east Aleppo?

There is a subtext to Beeley’s scenario that simply reeks of Muslim-hatred. Under the “jihadists,” children were human shields & women were “married, raped & discarded en masse.” Under the Christian Christmas tree, they were dancing in the streets. Pointing that out is hardly a defense of violent militias but only to suggest the sophistication & rancidity of Beeley’s methods of “journalism.”

This photo of east Aleppo was taken on December 13th. We’re wondering where they plugged in the Christmas trees.