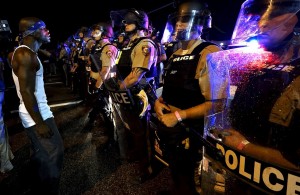 At this point in time, most of us don’t know if BlackLivesMatter (BLM) is just a hashtag, a rallying cry, a social movement, a network, or just a FB wall & website. All we know is that it isn’t a formal organization but seems to represent activists & organizations from the Black community trying to forge a broader civil rights & Black power movement. Veteran political activists understand how inchoate & chaotic that process can be. That’s the character of social movements–particularly when they’re trying to organize those sustaining violent political repression, like the Black community in the US.

So it’s quite disturbing to see what a political firestorm was set off when two Black women in Seattle, identified as BLM activists, interrupted an outdoor rally where Bernie Sanders was speaking. There’s a veritable witch-hunt against them. In the furor going on, the two women are accused of being Clinton agents, Sarah Palin supporters, or Republicans in disguise & not genuine civil rights activists. Who gives a rat’s ass who they are!? Interrupting Sanders is no big deal. I personally have been in auditoriums & watched politicians booed to the rafters, including at Harvard, Columbia, & NYU Universities.

Shouting down or interrupting speakers is not my preferred method of protest because those being shouted down always turn the discussion from their rancid ideas to the denial of their right to free speech. And civil liberties should never be mangled in that way. But what the two BLM activists did in Seattle is no big deal unless you are an uncritical supporter of Sanders or want a chance to go after Black power activists & make it look respectable.

Sanders stinks on civil rights & is trying to recover ground he lost so publicly & shamefully at the Netroots conference in July. When BLM activists (or the two who claim they are) in Seattle confronted him, his supporters go ape. Because that is how debased lesser evil politics goes. Some suggest it’s a COINTELPRO/FBI operation to divide Blacks from white progressives like Sanders. Sanders doesn’t need the FBI to discredit him. His support for Israel & a Jewish-only state, his identification of Palestinians with Hamas (only one of their political organizations); his xenophobic opposition to immigrant rights; & his massive fumbles at Netroots around BlackLivesMatter are worse than even the FBI could come up with.

Sanders is a political supernova & a flunky to the Clinton campaign. After the Democratic Party convention, he’ll be a has-been, his role as shill exhausted. No matter how fervent his supporters, his campaign amounts to nothing–& just feeds the politicians as saviors mythology. Everybody’s looking for another Jesus.

It apparently doesn’t take much for BLM activists to whip up a firestorm. Twitter was aflame when Black activists wanted to close the BLM conference in Cleveland (in late July) to whites so that Black activists could convene in privacy. This was denounced as an expression of toxic identity politics. And that might give us a clue to what’s really going on here.

What does matter to the future of US politics is not what two-bit hustler is elected president but the emerging civil rights & Black power movement. It appears those who despise identity politics are having serious problems with that emerging movement & want to discredit & thwart it. So let us be frank: white supremacy is a multi-faceted, Hydra-monster. Racism against Black people can strut itself as progressive, universal, unwilling to recognize boundaries between humans when what it really masks is a distrust in Blacks & in their leadership. So it bears repeating, there will be no social transformation in this country without the political leadership of Black men & women. How will that be won when so many people are racist? Through the exercise of Black political power.

This is a protester at the Ferguson, Missouri commemoration of the murder of Michael Brown last August 9th. This young man represents BlackLivesMatter & the future of the US–not the likes of Bernie Sanders.