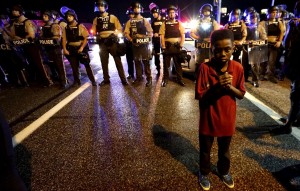 It was only a few months ago the US Justice Department (that cleared the cop Darren Wilson in the murder of Michael Brown on August 9th 2014) issued a damning report on the systemic racism & unconstitutional policies of the Ferguson, Missouri police department toward the Black community. The report highlighted a low ratio of Black cops on the police force & a wide range of abuses, including denial of the Bill of Rights. Ferguson, after the death of Brown, was one of the first cities where the militarization of police departments became evident & alarming.

This phalanx of white riot police taken at the commemoration protests yesterday would suggest the Ferguson police department hasn’t learned a damn thing & doesn’t feel the least constrained by the federal investigation. Why create a provocation by showing up in riot gear at a commemoration? Because you want to incite peaceful protesters angered by your presence? Because you want to deny them their constitutional right to protest?

This little boy is 11-year-old Amarion Allen standing in front of a police line. Does this unarmed little kid under four feet tall & 70 pounds pose any threat whatsoever to law & order in Ferguson, Missouri? What about the right to assemble? Does that still not exist in Ferguson? Should Obama send federal troops to enforce the rulings of the US Justice Department? Or is there no way around building a new civil rights & Black power movement to ensure that the Bill of Rights prevails in Ferguson & every other Black community in the US?