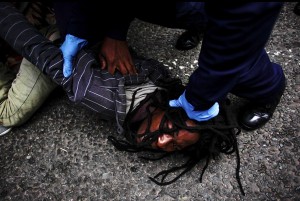 Media reports about xenophobic violence in Durban & Johannesburg, South Africa suggest the violence comes from unemployed South African youth against immigrants: the South African version of the racist & lazy-assed notion of “Black on Black violence” that passes for analysis in the US.

Several South African analysts have investigated what is going on with mob assaults on immigrants & it’s nothing so simple-minded or apparently obvious as conflict among the poorest of the poor–that is, competition for scarce housing & social services. Xenophobic violence has gone on for years & many poor working people give sanctuary to immigrants during the assaults.

Nor is it–as the South African government conveniently claims–the criminal element going on a rampage. According to South African political analysts, the class forces behind the violence are business owners, in competition with immigrant businesses, who are egging on especially disgruntled youth to scapegoat “foreigners”–in particular shop owners. Media reports much of the violence is against small shops & convenience stores run by immigrants.

Even though the economic pressures on small South African businesses are attributed to competition from immigrant businesses, in fact it is because of the broader economic crisis of the South African regime, not just integrated into but a key player in the neoliberal system in Africa. The neoliberal relationship with other African countries, dispossessing millions of people, is the reason for the massive immigration in the first place. The regime cannot fulfill the promises of the post-apartheid era because it will not repudiate the neoliberal economics of the white supremacist regime–creating massive suffering in other African countries & within South Africa.

The social movements in South Africa responded immediately to the violence, including school children & long-time activists, carrying placards saying “Africa Unite” & “Say No To Xenophobia.” In Durban, protests were organized by Abahlali baseMjondolo, the shack-dwellers’ movement (that is, the poorest of the poor & the political leadership against neoliberal domestic policies). Police used tear gas & a water cannon to stop the Durban march claiming it did not have the required permit. Mazwi Nzimande, an organizer from Abahlali, said they had obtained the permits but then were told they couldn’t proceed because marshals were not wearing vests. When the vests arrived they were still prevented from marching & police eventually intervened with rubber bullets. So police are firing rubber bullets to stop the mob violence & against peaceful protesters trying to stop it peacefully.

In fact, South Africa’s immigration policies are as barbaric as those of the US & European Union. Thousands are incarcerated, thousands are deported, including unaccompanied children & those seeking asylum from war. The xenophobic violence is laid directly on the regime’s economic & political policies–not disgruntled youth nor criminal thugs.

In this photo from May 8th, South African police in a joint operation with the South African military raided buildings in Johannesburg & rounded up 400 undocumented immigrants for deportation. The man police are assaulting is an immigrant.

Our fullest solidarity with the African immigrants in South Africa & with those protesting xenophobic violence.