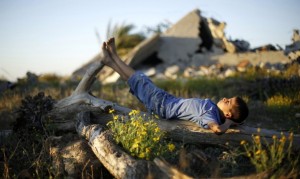 We cannot ignore the idiotic dishonesty of the Guardian-UK caption that describes the rubble in the background as this boy’s house in Gaza City destroyed “during the 50-day war between Israel & Hamas-led militants in the summer of 2014.” Euphemisms & lies are the language of ethnic cleansing.

But we can still savor the moment of a blue sky & a lovely day with this small boy. Life is still to be lived. And the economic & cultural boycott of Israel is still to be built.