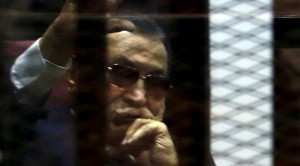 Media often can’t get the story straight even when they’re not lying. Last week they reported an appeals court was adjudicating charges against Hosni Mubarak for murdering protesters in the 2011 Egyptian uprising that overthrew him. Today we read the appeals court was deciding on corruption charges against Mubarak & his two equally corrupt sons. A guy like that is so corrupt he’s got charges coming at him from all directions.

The court of appointees from the Mubarak era probably stands as the epitome of a kangaroo court. So Mubarak & his two sons were sentenced to three years for embezzlement. The wonder is they got anything but it remains unclear if that will include time already served. The charges concerned millions of dollars of state funds Mubarak & his sons stole over years for renovating the family estates.

In the sarcasms of justice under military dictatorship, the hearing was held in the same courtroom that last month sentenced Mohammed Morsi to 20 years in prison for “inciting deadly violence” but in fact for not being as effective in imposing tyranny as outright military rule.

Mubarak & his sons were in the caged dock spiffed out in suits & sunglasses. Isn’t that the uniform de rigueur of dictators everywhere? Media reports their supporters waved & blew kisses at them. More likely the Mubarak family took some of the millions they stole to hire professional grovelers.

(Photo of Mr. Cool in the docket by Reuters)