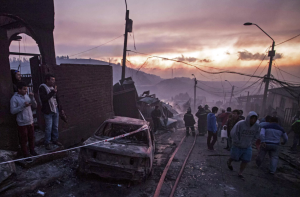 This conflagration is in Valparaiso, Chile, about 60 miles (100 km) from Santiago. It’s a port city with a metropolitan population of one million people. A raging fire broke out there last night which burned down many homes & forced hundreds to evacuate.
Investigators haven’t determined the cause of the fire but say the fire was fueled by trash mounds dumped in ravines that run throughout the city as well as by the flammable wooden structures of the slums.

The Chilean Interior Minister made a public statement blaming it on people who throw their trash into the gullies. He neglected to mention that under the dictatorship of Augusto Pinochet the entire sanitation system in Chile was privatized, a hallmark of neoliberal urban economics. That means it does not exist for the slums or poorer neighborhoods & has not for nearly 40 years.

This is neoliberalism, the barbaric phase of capitalism.