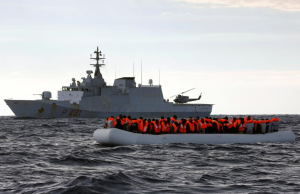 The barbaric phase of capitalism:

This overcrowded raft, 36 nautical miles (67 km/42 mi) off the coast of Libya, was drifting out of control yesterday with 112 African refugees aboard. Among the passengers were two pregnant women & five children, including a baby.

That Italian naval vessel behind it apparently thinks it’s on a Mediterranean cruise while the Spanish NGO Proactiva Open Arms rescue ship (a private rescue operation) is attempting to reach the raft to rescue the refugees. All of the 112 people were taken on board the Proactiva ship, an old fishing vessel.

There’s a question hovering in the air about the sailors working those European & NATO ships deployed there to turn back refugees. They endanger the lives of the refugees & must sometimes watch them drown. Do they sustain the same mental health issues like PTSD, the addiction problems, the suicide rate, the violence problems that war veterans do?

Open the damn borders. Immigration is a human right. Asylum is an imperative of civilization.