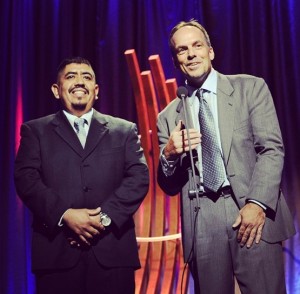 Two of the creepiest & most disreputable US politicians–Bill & Hillary Clinton–are holding their annual Clinton Global Initiative meeting in NYC this week. That the attendees are a rogue’s gallery is no surprise, including the CEO of Monsanto & several other corporate hotshots; Madelyn Albright, of ‘500,000 Iraqi children was not too big a price to pay to achieve US goals in Iraq’ notoriety; the head of NATO; the king & queen of Jordan; & a little group of always-present, sycophantic movie stars like Matt Damon, Leonardo DiCaprio, & Eva Longoria.

The program was notable for the number of women-centered business groups present–not reflecting a commitment to women’s rights, but to making money off women & using women’s rights to peddle US foreign policy, including Islamophobia & wars.

The regrettable part of the program was the award given to Greg Asbed & Lucas Benitez, the co-founders of the Coalition of Immokalee Workers (CIW), an organization with impressive achievements in the movement of migrant workers. It’s not certain what that means except that CIW has been compromised.

It might be advisable to contact CIW to express our disappointment & suggest they think twice about their political associations: http://ciw-online.org/contact/