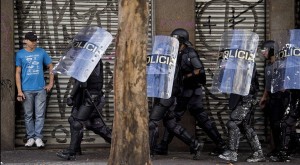 The excessive use of force & militarization of US police departments is an issue of the greatest importance to those who value the Bill of Rights. And it isn’t only an issue in the US because the gestalt of neoliberal capitalism is repression of democracy. The guys in this photo are identified variously as military police or riot cops in São Paulo, Brazil, deployed to evict 200 homeless families squatting in an abandoned hotel in the central district of the city. The cops served the eviction notice by knocking down the front gate with an armored vehicle & a barrage of rubber bullets, tear gas, & stun grenades. Media reports say they got aggressive only after evictees hurled objects at them from the windows. Nice try, but you don’t bring that kind of arsenal to an eviction unless you intend to use it. And you don’t come suited up in riot gear. A police official said his force spent two hours trying to cajole the families to vacate the building voluntarily. So when they didn’t agree to go docilely into homelessness, the troops were compelled to try to kill them? Is two hours of sweet talk really sufficient to the task?

Brazil, which continues to spend billions on elite sports stadia (the 2014 World Cup & 2016 Olympics), has a deficit of 6.6 million housing units for its estimated 20 million homeless people. In São Paulo, an estimated 10,000 people sleep rough on the street. According to Brazil’s own research institutions, half the population of São Paulo live in favelas, hovels, makeshift abodes & city officials estimate the shortage of housing units in the city at 700,000. Half the population of São Paulo is nearly 6 million people.

Central Zone of São Paulo (where the abandoned hotel is on a main boulevard) is a business & commercial district (one of the largest in Latin America) undergoing gentrification. Favelas in the area are now frequently set afire as a way to clear the poor out of the area to build chic shopping malls & luxury apartments. Arson & forced evictions have been primary tools for gentrification since urban renewal began in the 1970s & are frequent in the US, Phillipines, India, Bangladesh, Cambodia, Brazil, Nigeria, South Africa, & many other places.

Brazil has a strong homeless movement both in the rural & urban areas. They’ve been fighting pitched battles with the authorities over occupying abandoned buildings or setting up squatting encampments in abandoned lots. The Homeless Workers’ Movement (or Roofless Movement) employs legal challenges, public protests, mass occupations to demand homeless rights & public housing. The level of their political organization & the sophistication of their demands–not to mention their intransigence–is important to study since homelessness, including millions of orphaned or abandoned children, is a growing abomination in every country.