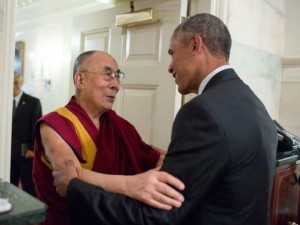 Obama met with the Dalai Lama for the fourth time last week despite protests from the Chinese government. Media reports about it were a cornucopia of banalities. It was about Obama’s personal affection for the Dalai Lama; it was to accept condolences for the Orlando shootings; it was so Obama could encourage “direct dialogue between the Dalai Lama & his representatives with Chinese authorities to lower tensions & resolve differences.”

Actually, the Dalai Lama has not been the official political leader of Tibetans in exile since he resigned in 2011. A prime minister was then elected in a process the Dalai Lama said would make the government in exile democratic & secular.

As for his spiritual leadership, he is now 80 years old & has to consider who will be chosen as his reincarnation–though the Chinese government is in an imbecilic dispute with him about who he will reincarnate as.

The call for dialogue with the Chinese government is curious–as is the entire US relationship with the Dalai Lama. After a failed uprising against the Chinese in 1959, he fled to India & as political leader of tens of thousands of Tibetans in exile called for Tibetan autonomy, that Tibet be an independent self-governing political entity. But in 1988, he went public in a speech where he accepted that Tibet would remain part of China which would control the political & economic affairs of Tibet while protecting its culture & religion. He reaffirmed that position–which is in fact the formal longstanding position of the US government–in an interview with Fox News last week after meeting with Obama.

There must be more to the story that would explain why the US continues to court the Dalai Lama rather than the prime minister of the Tibetan government in exile. Do they believe he wields such authority that he is indispensable to maintaining the status quo of Chinese control & countering those Tibetans who campaign for independence? And what does the US have at stake in maintaining that status quo?

Why is the Chinese government so incensed at Obama’s meetings with him? In a statement of protest, they said he “has long been engaged in anti-China separatist plots under the cloak of religion.” That’s possible but can they elaborate any? He’s a fairly conservative political thinker & not much threat to the status quo anywhere.

The occupation of Tibet is inextricable to political developments in China as a whole. The evidence is clear that it is not protecting the traditional culture & religion of Tibetans but moving in Chinese immigrants to alter the character. There were anyway problems in the political tradition which included persecution of Muslims.

Tibet is an important question & not just about who reincarnates the Dalai Lama. But to understand it, much of the secrecy & obscurantism will have to be removed from the discussion. If you can tell the political character of people by their associations, Tibetan exiles now dispersed over 30 countries would be wise to question the association of the Dalai Lama with the US government.