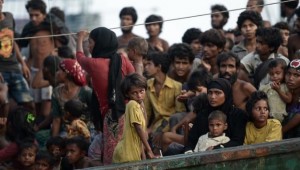 Ziaur Rahman is a 24-year-old Rohingya refugee & victim of human trafficking. He has now become an advocate for Rohingya human rights against genocide in Myanmar, against human trafficking, against state persecution & incarceration in countries where they sought asylum. It’s been one year since thousands were adrift in the Andaman Sea without food & water. Regimes in the region like Thailand & Indonesia turned them away & regimes around the world didn’t lift a finger to rescue them–some because their navies were occupied in the Mediterranean thwarting African refugees.

One year on, no justice for the ‘boat crisis’ survivors & human trafficking victims.

Still survivors are deteriorating in sub-human conditions with constant threat to life & liberty. With no legislation for the protection of boat survivors & kidnapped victims, they are suffering & human rights abuses continue. Governments are failing to protect survivors & UNHCR is failing to register & give protection to the survivors. So many human rights groups have discussed these concerns with EU & US officials as well as other members of the diplomatic community. Still no investigations & no protection for survivors.

Rohingya refugees are being kept in indefinite detention. Hundreds of refugees who survived the 15th May 2015 boat crisis in South East Asia have been locked up in poor conditions in Malaysia ever since. Survivors needs urgent action to stop detaining those out of prison & release detainees from prison & detention camp & start implementing genuine protections & urgent solutions, especially for human trafficking & kidnapped victims.

After harrowing footage of desperate refugees & migrants stranded at sea was beamed around the world last May, Malaysia agreed to accept 1,100 people. Almost 400 of those were identified as Rohingya refugees–people fleeing persecution in Myanmar. One year on, the majority of the Rohingya remain in Malaysia’s Belentik Detention Centre (IDC).

So who is investigating the fate of the boat crisis survivors? Women, men & children fled from persecution in Myanmar only to undergo the horror of being abandoned at sea by the unscrupulous gangs who run the sea routes. Malaysia should have been their place of safety but instead they have spent a year in detention with no end in sight.

The Malaysian government is criminalizing & punishing Rohingya refugees who are most likely victims of human trafficking. I am calling you to take action for the immediate release of the survivors & to work with international partners to ensure they are given the protection they are entitled to under international law.

The 15th May 2015 Andaman Sea ‘boat crisis’ claimed global attention when dozens of boats carrying thousands of desperate people were abandoned at sea & the governments of Thailand, Malaysia & Indonesia refused to allow them to disembark. Malaysia & Indonesia eventually accepted a total of three boats carrying more than 2,900 refugees & migrants. They agreed to provide temporary shelter to the group for a one-year time frame provided they would be resettled or repatriated by the international community within that period. To date, approximately 36 Rohingya refugees from the boat survivors group in Malaysia were resettled to the USA on last 26th May 2016.”

(This is a slightly shortened & edited version of Ziaur’s article.)