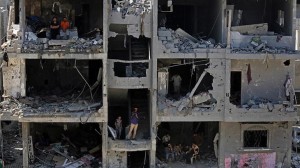 Can someone explain, to those of us who are confused, what Palestinian state that flag now flying at the UN represents? Is it the bantustate of Gaza which the UN says could be uninhabitable in less than five years? Where half a million people are displaced, homeless, & living in cement rubble? Where 75 percent of the households are “food insecure” & which Israel still controls with an economic blockade?

Or is it the West Bank bantustate under military occupation by Israel–the one surrounded by a cement wall where Palestinians have no rights, where settlers torch homes & mosques, poison water wells, uproot olive trees, brutalize & murder children with impunity? Where Israel keeps confiscating lands for Zionist settlements? Where Palestinian protesters are incarcerated for at least four years for throwing rocks against rubber bullets, grenades, tear gas, armored vehicles?

Or is it East Jerusalem where Israeli police are assaulting & rounding up Palestinians trying to defend the Al-Aqsa mosque from being vandalized?

Are we missing something in that flag thing or is it just another empty gesture? Because to some of us, that banner waving in front of the UN–which has stood solidly on the side of Israeli apartheid–seems like a mockery, a sarcasm, a slap in the face to justice & Palestinian self-determination.

Build the economic, cultural, & academic boycott of Israel & demand no aid of any kind to Israel.

(Photo of Palestinians living in their bombed out homes from EPA)