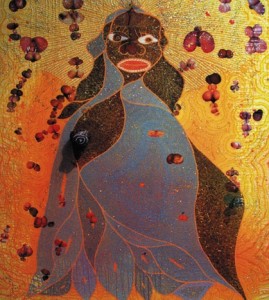 PBS did a special report tonight on the 10th anniversary of the Muhammad cartoon controversy when a Danish newspaper published twelve editorial cartoons depicting the prophet Muhammad in demeaning & outrageous ways. The publication set off protests by Muslims around the world–which media characterized as violent riots.

The PBS report interviewed the editor of the paper & two of the cartoonists who all live under guard because of death threats. The entire coverage was about the right of blasphemy in democratic societies & included homilies about how Muslims have to learn tolerance & put up with ridicule in the interests of democracy. The assumption is that all Muslims are involved in the threats rather than just some extremists–because of course, all Muslims are terrorists.

Iconoclasm is an old tradition in art. Dada art in Weimar Germany used it to pillory the corruption of the power elite & did not exempt religion in their sarcasms. But just as old as that artistic tradition are protests & even vandalism by religious groups against insults to their beliefs. There are thousands of protests by Christians against films like The Exorcist, Monty Python’s Life of Brian, The Passion of the Christ; protests against art exhibits like that of Robert Mapplethorpe (for pornography), Chris Ofili & Andres Serrano (for blasphemy), even Picasso for Guernica; protests against writers like Salman Rushdie, Henry Miller, even Gustave Flaubert for Madam Bovary.

Much of the stuff is offensive if you consider respect for religion important even if you don’t agree with the beliefs. Many people don’t have that respect & want to push the limits of free speech with insult. Others are just working out psychological conflicts in their break from religion or over sexuality. Iconoclasm is risky art & hardly all worthy. If you’re going to produce it, you probably hope it will offend–which doesn’t mean you deserve a death sentence but does mean you’re going to get some flak.

The difference with the Muhammad cartoons, like the Charlie Hebdo crap, is that the works are not directed at abuses of authority but intended to offend the believers themselves & are an act of aggression & contempt. Satire directed against power is a weapon of the oppressed but against the marginalized & persecuted is nothing but lowlife ridicule to make them feel small & powerless.

In 2005, when the Danish paper published the cartoons, the US was using Islamophobic social hatred to justify its barbarisms in Afghanistan & Iraq. While Christians are not persecuted in most places, Muslims were & are sustaining ethnic cleansing in several countries like India, Kashmir, Burma, China, Bosnia, Sri Lanka.

Those who defend this iconoclasm against Muslims point to Islamic fundamentalism & repressive Islamist regimes. There are compelling social, economic, & political reasons for the emergence of Muslim fundamentalism & these need to be studied. Shooting your mouth off in one genre or another contributes to persecution & violence against Muslims & has precious little to do with free speech.

This is not a defense of fatwas or vandalism against artists but a simple assertion that when the target of blasphemy & insult are people whose practices are being outlawed, mosques torched, & countries bombed, then iconoclasm in art becomes a weapon of oppression & not an expression of human freedom.

The photo is The Holy Virgin Mary by British artist Chris Ofili which provoked protests & threats when it was hung in the Brooklyn Museum in 1999 because it includes elephant dung. It was eventually vandalized.