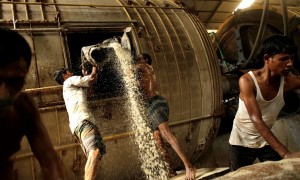 During the Muslim holiday of Eid al-Adha (last week), thousands of animals are slaughtered & now is the busy season for the tannery industry to process the hides. Leather tanning is done in many countries but at least 60 percent is done in “developing countries” as Bangladesh is called–a political misnomer since the economic value of working people in those countries is not based on backwardness but on super-exploitation. There’ll be no “developing” going on–except in the number of Bangladeshi millionaires profiting from dirt cheap labor costs & no labor or environmental protections. That’s what sweatshop economics are all about.

These young men work in a tannery in Hazaribagh, a section of Dhaka, which has about 95 percent of the tanneries in Bangladesh’s growing, lucrative leather industry. Leather & leather good (shoes, handbags, suitcases, belts) exports ballooned from USD $663 million to 70 countries a few years ago to over $1 billion in 2014.

The government provides millions in incentives & subsidies to tannery owners without requiring them to enforce environmental or labor laws. There has been international exposure of conditions in the tanneries by human rights groups but no improvements.

Labor law violations include child labor & lack of any safety protections. As a result, tannery workers suffer many debilitating health conditions–particularly skin & respiratory ailments & disfigured or amputated limbs. They endure discolored, itchy, peeling, acid-burned, & rash-covered skin; fingers corroded to stumps; aches, dizziness, nausea. According to the World Health Organization, half of Hazaribagh’s tanning workers have respiratory disease, including the children, & 90 percent will die before they turn 50. What kind of crap is that!

Contaminated leather waste products are processed into feed for the growing poultry industry in Bangladesh. It doesn’t require a single epidemiological study to understand that feeding animals chemical, contaminated offal will compromise animal & human health, yet there is no government monitoring of poultry feed production.

How has it happened that human beings have become not just the chattel but the offal of the global production system? But Bangladeshi workers are standing up by the thousands against these conditions despite massive labor repression. International solidarity is required not to take away their jobs but to enforce the highest standards of protection.