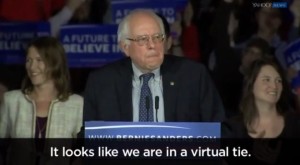 If there’s anything more rigged than a craps game, it’s the US electoral system. We’re hearing all about the election results in Iowa, like it meant something, but few could tell you what actually took place. The Iowa caucus elections that took place last night have nothing to do with popular democracy but instead play a role in the ruling elite’s method for vetting the electability of candidates.

Iowans did not go to the polls. Those who voted in the one-hour procedure were a tiny minority of people from both parties who actually attend infrequent meetings called precinct caucuses. Neither party is a membership organization; they’re elite apparatuses for electoral purposes. The caucus structure of the two parties is a hack job that gives a semblance of democratic control that does not exist.

How I know this is only because I worked my way through college & one of my jobs was for Margaret Harding, the former head of the Minnesota Democratic Party (DFL), & a preeminent snob. Though she disdained me as working class, she encouraged me to join a DFL precinct caucus prior to the 1968 elections. People who have illusions in that party should join a caucus because you will see what I did: that it had nothing to do with my life or my political & economic interests.

The people who attended were snobs, hacks; half of my caucus were members of the Communist Party (CP) who I knew from the antiwar movement. At the same meeting they voted for withdrawal from Vietnam & endorsed pro-war candidate Hubert Humphrey for president–contradictions principled people cannot live with. The members of the CP were in the DFL because they are committed to changing it from the inside. But it changed them & not for the better.

What happened in Iowa is significant to the power brokers in both parties in order to gauge what to do in this election which has become a fiasco. Even if Sanders took the caucus vote in a sweep, it doesn’t mean those who really run the Democratic Party would nominate him as candidate. They can’t deliver on his rhetoric. The GOP power structure would be down on their hands & knees thanking God that Trump lost but it’s more likely they engineered the outcome. That’s how rigged the game is.