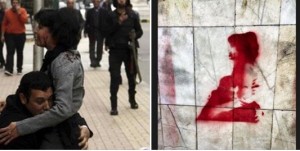 Shaimaa al-Sabbagh was an Egyptian socialist & activist who was shot to death on January 24th 2015 when police attacked a peaceful protest with tear gas & bird pellets. The protesters were marching to commemorate those many activists killed during the Egyptian uprising of 2011 that ousted dictator Hosni Mubarak.

Many have drawn cynical conclusions from the reversal of the Egyptian uprising. It’s easier to be a cynical smart-ass than it is to sustain hope because the latter doesn’t rely on miracles or deus ex machina solutions but requires diligent commitment. That’s why al-Sabbagh has become a symbol of resistance to Egypt’s military junta–because despite massive repression, she dared defiance. That’s what makes Palestinians & Kashmiris so politically vital–that they dare defiance against what seems all odds.

We should take a moment to honor Shaimaa al-Sabbagh & all those who lost their lives in the Arab uprisings that began five years ago. The revolutions against tyranny aren’t over. Social transformation is not child’s play nor for smart-alecks so the forces of change need time to recover from the blows, assess what happened, & reassemble under conditions of extreme repression.

The image on the left is a photograph of the moment of the police murder of Shaimaa al-Sabbagh at a peaceful protest commemorating the 2011 revolution ousting Hosni Mubarak. She was part of a protest going to lay flowers in Tahrir Square in honor of those who died. The moment of her death has become a political icon & a grafitti call to arms now appearing on Cairo’s streets.

Our deepest respect & fullest solidarity with the democracy movement in Egypt. May we learn from them how to stand against tyranny as they did–without flinching.