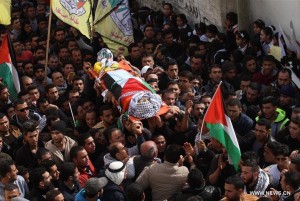 The French Foreign Minister Laurent Fabius just announced that France will initiate an international conference to “bring about the two-state solution” for Israel & the Palestinians & will recognize a Palestinian state. Mahmoud Abbas says he’s all for the conference. What bad idea isn’t he in favor of? Monsieur Fabius should have been picked up soon after the announcement & sent back to the planet he flew in from.

When Palestinian activists propose a democratic secular state where Jews & Palestinians live as peers, that involves massive compromises & an extraordinary political & humanitarian spirit that puts the past of Israeli colonialism & apartheid behind to forge a new future based on fraternity & sorority. It’s a just solution & the only workable one.

A bantustate solution for Palestinians is a pipe dream only promoted by those committed to the existence of a Jewish-only state. It’s politically dishonest & reprehensible to blither on about a two-state solution whilst Israel continues to move in Jewish settlers from all over Kingdom Come to take over & live on Palestinian lands. Israel has no intentions of a bantustate solution. That’s what ethnic cleansing is all about–to make Palestinians go away. To believe otherwise is more idiotic than to be on Medicare & still believing in the tooth fairy.

The French initiative came after UN official Ban Ki-moon told the Security Council that Israel’s expansion of Jewish settlements in the West Bank ‘raised questions about its commitment to a two-state solution.’ Can’t get anything past that guy! Members of the UN Security Council didn’t just fall off the turnip truck. The US is sitting there listening while, by Obama’s own admission, they’re bankrolling the settlements. How much of this charade are we expected to play along with?

If there’s going to be any international conferences about Palestinian justice, it should exclude the shysters trying to get something past us. It should instead involve Palestinian activists educating other activists about the problems they face & how we can build solidarity with them; it should be about building BDS; & it should be about promoting a democratic secular solution that is the only possible solution. Enough with the bantustate drivel. Enough with the treacheries. It’s justice time.

This is the funeral cortege of 29-year-old Palestinian Majdi Abu Omar who was shot dead near Nablus, West Bank by Israeli soldiers. There isn’t much information about his murder except a vilifying reference to him as a “gunman.” That’s not how we see those who stand up against Israeli colonialism. May he Rest In Peace.