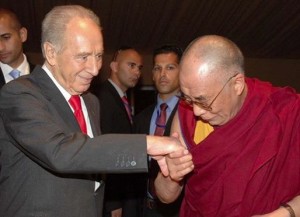 Everybody has to make an accounting in the era of genocide. Most of the Nobel Peace Prize winners aren’t shaking out so well–making the honorific more a stigma of opprobrium. If you’re going to be held up, even worshipped, as a paragon of non-violence & compassion, then you cannot align yourself with Israel against Palestinians or India against Kashmiris as the Dalai Lama does. There’s no two ways about it.

What’s perplexing is how the Dalai Lama can live with such a disconnect between opposing the Chinese occupation of Tibet & supporting the occupations of Palestine & Kashmir. More likely the disconnect is only apparent & in fact he has deep affinities with tyranny which he does not wish to disclose.

He did urge Aung San Suu Kyi to express opposition to the Myanmar regime in defense of the Rohingya when they were adrift in the Andaman Sea–but that was just once. Shouldn’t a man of compassion make it his mission to speak out ceaselessly for the oppressed & persecuted? And not just with abstract calls for compassion?

Kissing the hand of Shimon Peres? Who is he counseling in non-violence? The oppressor or the oppressed. The kiss betrays whose side he is on.