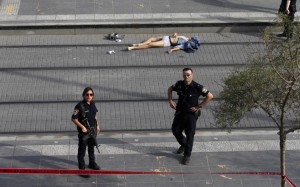 This is a crime scene & not in the way media & the Israeli police claim. The Reuters caption says the body is an “alleged Palestinian assailant at the scene of a stabbing” in the illegal Israeli settlement of Pisgat Ze’ev in occupied-East Jerusalem. What happened here? Who shot the young man? And why is he in his underwear publicly exposed?

In attempts to cover for egregious human rights crimes against Palestinians–actually what are called extrajudicial executions–media photojournalism has become a series of non sequiturs, imbecilities, & outright lies. They’re not writing a book when they caption a photo but wasn’t the reporter’s curiosity piqued when he saw the man lying there undressed? Didn’t he want to know who shot him? And what about the alleged stabbing victim? Did he/she die or were they just treated for a hangnail & released?

Instead the caption proceeds to “Palestinians escalated the pace of stabbing attacks in the Jerusalem area on Monday & Israeli police shot dead two of the alleged assailants in the worst spell of street violence for years.” The streets of occupied-East Jerusalem must be lined with dead Israeli bodies then. But can they produce some evidence of that? Because all we’re seeing & reading about is the toll of ‘alleged Palestinian assailants’ who’ve been shot dead by police.

You know, police procedurals are a TV staple. We all know how these crimes play out. Were the ‘alleged Palestinian assailants’ shot in the midst of stabbing when police might have missed & hit the victim? Or when they moved away from their victims? Or when they were on the run? Was there no point when police could just order him to put the knife down, cuff him, & cart him off to the Israeli gulag? Did they have to assassinate him right on the spot? And then take his clothes off? Isn’t that kind of like desecrating a corpse? Or maybe there was no crime at all. It’s all too creepy to consider.

Emergency rallies are imperative to defend unarmed Palestinians from this massive pogrom. And build the hell out of the economic, cultural, & academic boycott of Israel.