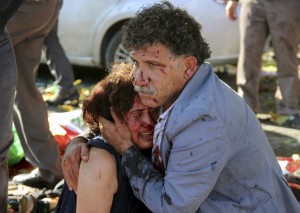 The bombing attack last Saturday on the antiwar march in Ankara, Turkey, is an outrage of concern to political dissidents in every country on every issue. At least 128 activists, including many Kurdish activists, were killed & hundreds injured.

It is now routine that riot cops assault protesters with truncheon & tear gas which only emboldens right-wing goon squads. But there is more reason to suspect the Erdoğan regime was involved in this attack because of Turkish bombing sorties against Kurds. We await further information on who perpetrated this assault.

Our deepest sympathies to the families of victims & to those who survived this monstrous, cowardly attack. Our fullest political solidarity.

The man here is tending to a woman who was injured.