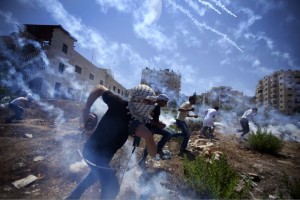 This is a photo of Palestinians running from Israeli soldiers following a protest against the slaughter in Gaza outside the Ofer prison, an Israeli military prison & the site of frequent Palestinian protests. Ofer prison is near Ramallah in the West Bank. Israeli soldiers don’t just excessively use tear gas against Palestinians protesters; they use stink bombs, stun grenades, & live ammunition & in fact have already killed young activists in the West Bank protesting the slaughter in Gaza.

What’s interesting about this photo is it typifies photojournalism from the West Bank & makes it appear Palestinian intifada is a handful of young holligans with rocks. A far more compelling sight would be the reportedly 50,000 protesters near Ramallah a few days ago or the 30,000 Palestinians who marched yesterday in the West Bank city of Hebron. Both marches were confronted by Israeli jackboots using live ammunition. There have been some deaths & dozens of injuries inflicted. You have to hunt high & low to find photos of those massive protests which apparently didn’t pique the interest of editors but are mighty interesting to the rest of us because of the remarkable Palestinian defiance of the Israeli jackboot occupation in the West Bank.

Palestinians have been vilified in the most insidious & repugnant way as terrorists by Israeli propaganda because they defy the nonsense of the Exodus narrative claiming God promised Palestine to Jews so Palestinians have to pack up & get out or be violently dispossessed. There are even Zionists who claim they moved from Iowa or New Jersey or wherever the hell because they feel a mystical affinity with Palestine. Mystical affinity, my ass! Most of us feel mystical affinities getting deals at a flea market so mysticism must really go into high gear when you get land & all sorts of perks for free just by claiming you’re Jewish & moving to Israel. Jews in the Americas or Europe have no more affinity to Palestine than those of Celtic descent have to the Rhineland.

Stand with Palestinian justice this weekend by getting to the nearest rally demanding “Stop the genocide in Gaza!” Honor the economic boycott of Israeli products (barcode beginning 729).