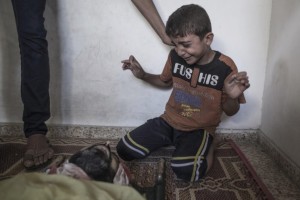 There’s no two ways about it now–Israel is targeting children in Gaza. We can anatomize the ideology of Zionism till the cows come home: What did Theodor Herzl really stand for? Is he really as banal as some claim? Or behind his rancid ideas, is there even a kernel of possibility for freeing Jews from persecution? Is Zionism really not wedded theoretically & practically to colonialism & neoliberal plunder? We leave such exegeses to those who examine historic excreta to rewrite reality. The Zionist state of Israel is damned by the simple fact that it takes bombers, tanks, mortars, flechette shells, & DIME shrapnel after little kids. And it does so in order to kill Palestinian intifada, to destroy the future & the soul of political resistance to Israeli apartheid & ethnic cleansing. Those it does not bomb to death, Israel hopes will be too demoralized & defeated to continue the struggle for justice.

Those who believe in justice & human freedom cannot allow such atrocities to continue. While Gaza is being pummelled, we can hardly expect their resistance to outweigh their struggle for survival. That’s where we come in–to pick up the banner of intifada & carry it across this globe demanding the end of military aid to Israel & that Israel stop the massacre in Gaza.

This small boy grieves the loss of a family member killed when Israel bombed the UN school serving as a refugee center in Jabaliya, northern Gaza–not too far from the hills of Sderot, Israel where they watch ethnic cleansing in glee.

All out this weekend as the international solidarity flank of intifada. Stand with human freedom. Help pull those Israelis back from the brink of mass psychosis to embrace the concept of human solidarity. If Palestine is to be a haven from persecution, it will not be the Zionist state of Israel but a democratic secular state where Jews & Palestinians will live as brothers & sisters.