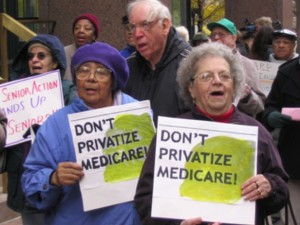 Pensions & education are two of the things targeted by neoliberalism, the barbaric phase of capitalism. All over the world, there are pitched battles over these issues with seniors, students & teachers arrayed against regimes. Both are central to why Mexico disappeared 43 student teachers.

In the US, where higher education has always been expensive, it wasn’t until the early 1960s that working class kids had a shot at going to college. They needed more workers with high-tech learning & made student loans more readily available. It still wasn’t easy, but it was possible.

The seniors they’re battling today over pensions are from the glorious 1968 generation that included uprisings in several colonial countries & in France, Czechoslovakia, the US, & elsewhere. Did they think we would “go gentle into that good night” while they absconded with our pension plans?

We have seen relentless battles over education on every continent because for the oppressed there’s no going back from learning. For the privileged, learning is often something one flaunts to show superiority–like a pedigree. For the oppressed, learning is a way to understand why inequality is so exacting–or it’s a ticket out of hell.

Speaking personally, I have always taunted that if capitalism hadn’t fought me so hard on getting an education, I might be a Republican or Democrat today. Once they fry your ass on something so fundamental, there’s no amnesty granted tyranny.