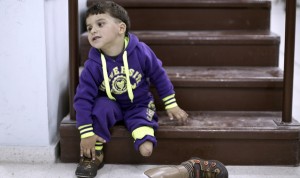 Media has such a way with words, such delicacy in telling the truth when it comes to Palestinians. They don’t always lie but they never tell the truth. This is 3-year-old Shareef al-Namla who lost his foot “during the conflict between Israel & Hamas last summer.” So deftly, Operation Ethnic Cleansing becomes “the conflict”–like there was any kind of military symmetry between Gaza under embargo & Israel with one of the mightiest military machines in the world.

Those who don’t understand the ebbs & flows of social movements are bewailing that mass protests against Israeli barbarism have subsided & they assume this means a return to political indifference & continuing isolation for Palestinians. On the contrary. Political movements can’t stay mobilized without respite–though this can be a hard thing to accept. There will continue to be rallies around the world but the focus now is on building the cultural & economic boycott (BDS) of Israel, on broadening educational work so that mobilizations in the future will be even more massive.

Everyone can participate in evangelizing for BDS through schools, churches, unions, community groups. You don’t need a podium or a campus. Operation Ethnic Cleansing in Gaza was a historic turning point when that Exodus narrative was exposed & blasted into little tiny bits. Solidarity activists have an opening now to tell the truth & have it heard.

Build the cultural & economic boycott of Israel! Demand “No military aid to Israel!”