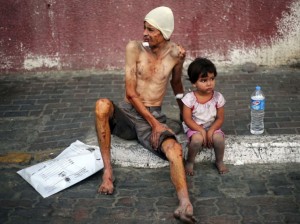 This man, riddled with shrapnel injuries from illegal weapons used by Israel, is waiting with his little girl for treatment at Khan Younis hospital in southern Gaza (yesterday). As another Palestinian in Gaza said: “We are waiting here to see if we are meant to live or die. Every day is another day of fear & destruction. If you don’t die, someone you know is likely to be among the dead. This is no life a human being can accept.”

This is no life anyone of good will can accept for Palestinians. We will not stand silent or play stupid, shaking the naughty finger of phony impartiality at both Israeli genocide & Hamas self-defense.

Palestinians are re-teaching humanity the meaning & power of human solidarity. The right-wing who want to silence Palestinian justice are jumping up & down demanding we abandon Palestine & turn our attention to Syria–as if they gave a rat’s ass about injustice anywhere. They’re trying to play us for fools. A massive international movement of solidarity with Palestine will change everything, will undo decades of deals & maneuverings & phony peace plans meant to dispossess the Palestinians & install a police regime in Israel to maintain neoliberal control of the Middle East–19th century colonialism writ large. And that includes in Syria.

There is no competition between solidarity with Gaza & the struggles against tyranny anywhere. The Palestinian solidarity movement dwarfs international opposition to US-NATO wars in Afghanistan, Iraq, & elsewhere. Antiwar activists do not sit in meetings pouting resentfully & making invidious comparisons; they’re building the hell out of Palestinian solidarity because their vision is international & they could never stand aside from ethnic cleansing or pit one antiwar struggle against another. So when you hear that baloney faulting Palestinian supporters for not taking up the cause of Syria, politely (or even impolitely) tell them to stuff it in the appropriate place.