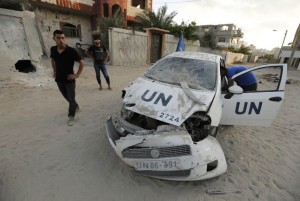 This bombed out & clearly marked UN vehicle was taken out yesterday by Israeli bombers in northern Gaza. This is near both schools the UN used for refugee centers until Israel bombed them & killed & injured dozens. It’s also just across the border from the hills of Sderot, Israel where psychos gather to cheer on ethnic cleansing.

Ban Ki-moon made a peep of protest but not too loud lest UN support for Israel might be questioned. You’d think this might be grounds to charge Israel with war crimes or at least raise suspicions. But you can give that a snow ball’s chance in hell. One thing is for sure: UN workers on site might think twice before accepting duty in Gaza because our man Ban does not have their backs.