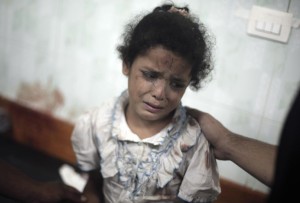 If there’s one thing Operation Ethnic Cleansing in Gaza has revealed other than the unspeakable barbarity of Israel, it is the widespread problem of cognitive dissonance. We say cognitive dissonance rather than arrant stupidity or indifference to or outright defense of war crimes, hoping that those who defend Israeli genocide by denouncing Hamas self-defense will eventually free themselves from psychosis to face reality.

Israel is on a mission to destroy as much of Gaza & kill as many Palestinians as it can before world opposition stays their hand. The US & Europe recognize that Israel’s savage assault is undermining the carefully orchestrated Exodus narrative which has served their economic & political interests for 66 years. Down the drain now after Israel bombed one too many homes, schools, mosques, & killed far too many little kids on playgrounds in Gaza.

The war in Gaza is not being conducted in secret; hundreds of photos show the carnage of ethnic cleansing–which may explain why Israel bombed clearly marked press vehicles in Gaza. A necessary part of conducting colonial wars is secrecy or embedded reporters who learn to look the other way. The most horrific case in point would be the war of colonial plunder in DR Congo which has gone on for years & killed millions of people & is never mentioned, let alone reported, in media. Photojournalism is a dangerous occupation, especially if you’re not embedded up the colonizer’s ass.

Photojournalist reporting has made all the difference in this war, in this assault on Gaza, because the truth is there for all the world to see. Once again, playing stupid doesn’t cut it anymore.

This little girl survived last night’s bombing of a school serving as a UN refugee center in the Jebaliya refugee camp not far from the first school bombing in Beit Hanoun last week. The school was struck by several tank shells because Israel wanted to make sure most were killed & those who survived would be traumatized beyond healing.

Media is reporting that last night Israel unleashed it’s heaviest bombardment yet, striking this refugee center, mosques, & Gaza’s only power plant as ‘symbols of Hamas control in Gaza’. That’s what you call grasping at straws to justify war crimes. Since when are refugees, including small children, elderly, disabled symbols of anything but vulnerability during war? Since when is the only power plant supplying electricity to Gaza a symbol of Hamas? We would fault this bullshit for banality were it not so laden with criminality & collusion.

It’s already being reported that the children of Gaza are suffering massive psychic damage from this phase of Operation Ethnic Cleansing. How could it be otherwise? How could anyone expect small children fleeing bombs & seeing beloved buried in rubble or cut in half by shrapnel would be able to sustain with equanimity what those psychos on the hills of Sderot, Israel are celebrating with popcorn & soda?

Protests continue around the world & will be out in force this weekend demanding “Stop the massacre in Gaza!” Grab a placard & join one; add your voice to the over one million people in dozens of countries & hundreds of cities & small towns who refuse to be taken in by war propaganda. If you cannot get to a protest, evangelize for the economic boycott of Israeli products (barcode beginning 729) & support the cultural boycott of Israel. Now is the time for men & women of good will to join the thunderous chorus demanding justice & the end to genocide.