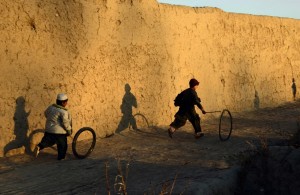 This is the hard-hitting war journalism of modern media. And here most people mistook it for a bucolic photo of children playing in Zhari, Kandahar province, Afghanistan. In that regard, could it be taken as war propaganda & a denial of realities? It’s not that children in Kandahar don’t play in a war zone or that seeing them isn’t always delightful, but that is not the story that matters in Kandahar where the CIA, US special forces, & US army all have bases; where there are constant armored & foot patrols searching for Taliban & harassing the people. Kandahar is the scene of a 2012 massacre when a US army sergeant murdered 16 people, including nine children, & then attempted to torch some of their bodies; & where there are hundreds of land battles & bombing sorties.

When Rolling Stone magazine did an investigative piece about US special forces in Afghanistan, they reported one US official saying about Wardak province: “They’re venomously anti-American there. It’s just always been that way. Sometimes our adversaries are the men & women of a community.” You can be sure the same is true for Kandahar province & that is the story that needs to be pursued. That’s what war journalists should be covering instead of children rolling hula hoops–& would be covering if there weren’t some kind of news censorship by the US military.

Given that media will not break the news barrier, we will turn this photo meant to deceive us into an antiwar anthem. Children have a human right to play without fear of being blown up or shot down. We demand the immediate, unconditional withdrawal of all US-NATO forces from Afghanistan.