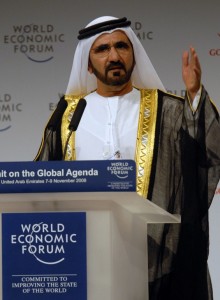 The Sheikh is sponsoring the Global Women’s Forum 2016 going on today in Dubai with 2,000 participants & 200 speakers from 70 countries where Lagarde is a keynote speaker. It isn’t reported who is representing the US since Hillary Clinton is otherwise engaged. This is her kind of feminism. If long-time feminists are wondering where their invitation is, just thank your lucky stars they overlooked you.

We’d take a look at Madam Lagarde’s feminist credentials but even if she had them (which she does not if you consider feminism the theoretics of women’s oppression), her record of destroying the lives of men, women, & children on every continent speaks louder than a little rah-rah for equality. IMF austerity programs in countless countries destroy public education; healthcare, including prenatal care & nutrition programs for children; pension programs for seniors. IMF austerity policies have expropriated millions of Indigenous peoples & farmers in the interests of multinational agribusiness & mining firms–forcing millions into homelessness & urban slums, then out of those slums to the streets for IMF-mandated urban development & gentrification. She can take her kind of feminism & put it where the sun don’t shine.

As for the Sheikh of Dubai–his multiple wives might not shake out that well in international feminist circles, even if he did make them functionaries in his little dog & pony show. But what is much more damning are the fighter jets his royal hot-stuff is contributing to the barbaric Saudi-led bombing assault in Yemen, now nearly a year old. They’re bombing hospitals, schools, residential neighborhoods & we’re supposed to buy his hot air about women’s rights!?

Don’t make a mockery of feminism. Don’t turn the fight against women’s oppression into a dog & pony spectacle. Keep that for if Clinton becomes president & it’ll be all the rage in those circles. But keep the rest of us out of it.