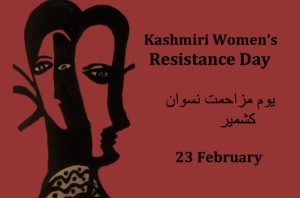 Today is Kashmiri Women’s Resistance Day & also the 25th anniversary of the Kunan Poshpora mass rape & torture case of February 23rd, 1991. On that night, an elite regiment of the Indian army, on the pretext of hunting for “militants,” entered the twin villages of Kunan & Poshpora for a search operation. All men in the villages were herded into a nearby field while women were asked to remain indoors. Troops entered the homes & raped at least 23 girls & women, including a pregnant woman & women in front of their children.

The Indian government has repeatedly rejected charges of mass rape & torture as baseless, absurd, & unfit for criminal prosecution. It has campaigned to acquit the army of such charges & discredit those who make them. By October 1991, the case was closed by the Indian police.

Human rights groups challenge the conclusions of the Indian government. Even the US State Department, under President George H.W. Bush (the CIA guy), in its 1992 report on international human rights said there was “credible evidence” the Indian army engaged in mass rape at Kunan Poshpora.

In December 2012, the rape & murder of a women student in Delhi galvanized a protest movement & inspired five young Kashmiri women to investigate & write a book about the incident. The women are Samreen Mushtaq, Essar Batool, Natasha Rather, Munaza Rashid, & Ifrah Butt. The book was published by The University of Chicago Press & distributed by Zubaan Books in Delhi, India.

The book entitled, “Do you remember Kunan Poshpora?” is part of an eight-volume series on “Sexual Violence & Impunity in South Asia” & was officially released last month at the prestigious Jaipur Literature Festival. It will be released today at an event in Srinagar.

The book is important first of all to bring justice to the women of Kunan Poshpora but it also has international political importance since mass rape of women is a widespread military practice. It is an orchestrated, cold-blooded, & systematic military operation, not a case of troops gone wild. It is particularly notorious now in Kashmir, the Democratic Republic of Congo, & in Guatemala where in 2012 Mayan women testified at the trial of general José Efraín Ríos Montt who employed mass rape in the civil war between 1960 & 1996. In all cases, despite overwhelming, irrefutable documentation, impunity for the military is served up in place of justice.

Our deepest respect to the women of Kashmir & the authors of this book for standing up against the brutal edifice of military occupation.