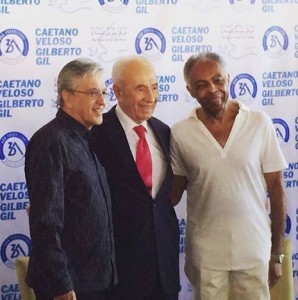 It’s one thing that Caetano Veloso & Gilberto Gil defied the Palestinian call to honor the cultural boycott of Israel by performing there. They proved themselves lowlife jesters for apartheid & disgraced themselves by posing with Shimon Peres, the former president & terrorist.

It’s another thing entirely they try to play Palestinians & the BDS movement for fools by visiting Susiya in the West Bank & making statements about how “Israeli militarism should be used as a defense, never as a means of attack & oppression of the Palestinian people.” Who the hell do they think they’re kidding!? The only thing missing was a touching moment of prayer at the apartheid wall. Note they did not go to Gaza.

Once you breach the cordon sanitaire around apartheid, it’s all over but the shame.

(Photo is the two jesters with the terrorist)