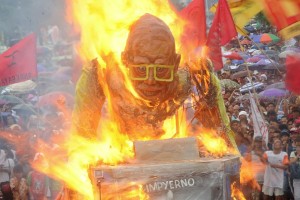 You gotta love how activists do things in the Philippines. Here they’re burning an effigy of president Benigno Aquino III after riot cops blocked them from marching to the parliament where he was giving a state of the nation address to the congress–likely recycled from the speeches he’s been giving everywhere about the economic miracle his policies have wrought.

Activists have plenty to protest since under Aquino the Philippines have become a showcase of neoliberal scorched earth economics. Thousands of farmers are being expropriated for agribusiness plantations; thousands of slum residents are being burned out & forcibly evicted from newly-privatized public lands to make way for resorts, casinos, shopping malls; the country is being re-militarized to serve US competition with China in the South China Sea region.

Our deepest respect & fullest solidarity with Filipino activists; we only regret the US antiwar movement is presently too weak to support your work. We are committed to change that.