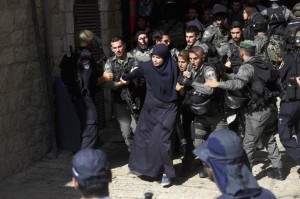 This is another one of those encounters media is calling a “scuffle” with Palestinian women at Al-Aqsa Mosque yesterday. Can you imagine how it would be reported if over a dozen Palestinian men were assaulting an Israeli woman!? But since Israeli soldiers don’t hesitate to assault Palestinian children, why should they make an exception for women?

Israeli police reports on the conflict at Al-Aqsa said masked Palestinian “rioters” stockpiled explosives & weapons in the mosque to use against Jewish worshippers at the Wailing Wall. How were they going to get them from the mosque to the Wailing Wall plaza? In fact, how did they stockpile those weapons & how were they going to get at them to use against “worshippers” since men under 50 aren’t allowed inside the mosque? And why do they show photos of women without masks being assaulted by border police but no masked “rioters”?

It’s one thing for the Israeli government to pass this baloney off as fact but it’s quite another that media would report it like the gospel truth when it’s so transparently foolish.

It has to be said that when the Israeli military condones & encourages this kind of human rights misconduct, they are opening up Israeli civilian society to all sorts of problems when soldiers are demobilized. Mental health issues & social dysfunction involving violence become routine. You don’t transition from this kind of violence to being model citizens content with parenting & gardening. That’s the price paid for militarism evident in crime statistics associated with veterans certainly in the US & likely all over the world.