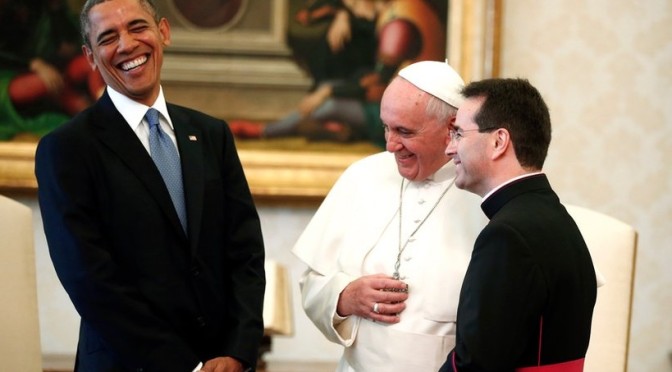 It’s swell Obama & the pope found something to chuckle about for the cameras but this is not just a photo op to prop up Obama’s waning popularity. Media sources can’t figure out what the hell they talked about in their 50 minute meeting or what Obama discussed in a separate hour-long meeting with Cardinal Pietro Parolin, the Vatican’s Secretary of State, because the Vatican & Obama issued distinctly differing reports on the content. The media’s usual facility with passing off baloney as hard news served them well here & most repeated Obama’s claim that the two discussed a common commitment to world peace, eliminating poverty, & immigration reform.

The Vatican issued a statement veiled in poetics saying they raised concerns about “the exercise of the rights to religious freedom, life & conscientious objection” in the US. This is an intentionally vague reference to the Catholic Church’s active opposition to the Affordable Care Act aka Obamacare which requires employers to cover the cost of contraception in insurance plans. It’s good the Catholic hierarchy has it’s priorities straight since Obamacare also denies medical coverage to millions of undocumented immigrants & that was not in contention. Doesn’t that exclusion fall under the ‘exercise of the rights to life’?

Obama denies that Obamacare came up in discussions with the pope but admits it was covered in his talk with Cardinal Parolin. They wanted talks with the pope to be a photogenic moment so left it to the cardinal to put the screws on Obama.

The Francis-Obama meeting took place just two days after the US Supreme Court heard two cases challenging the “contraception mandate” in Obamacare & whether corporations have a right to opt out of it if it offends their religious convictions. Two cases by Hobby Lobby, Inc. & Conestoga Wood Specialties claim contraception violates their First Amendment rights & the Religious Freedom Restoration Act. The US Conference of Catholic Bishops (USCCB) filed amicus curiae briefs in support of both corporate challenges.

Abortion is not at issue in either suit because, along with many state & insurance company restrictions, federal law (the Hyde Amendment) bans federal funds from being used for abortions except in the cases of rape, incest, or if the life of the woman is in danger. While not agreeing, one can understand opposition to abortion & why it violates some religious commitments. But contraception!? The Catholic hierarchy claims contraception drugs & devices may cause abortions. So could denying medical care to undocumented immigrants but that does not concern the Vatican. Denying medical care to immigrants will also cause deaths. So where’s the Catholic hierarchy on that issue?

Reproductive rights for women are under serious attack in the US. It will take far more than legislative filibusters or electing women politicians to fend these massive assaults off. Proof of that is that the voices of women politicians are quiet as a mouse, if not altogether mute, in opposing these attacks or organizing women against them.