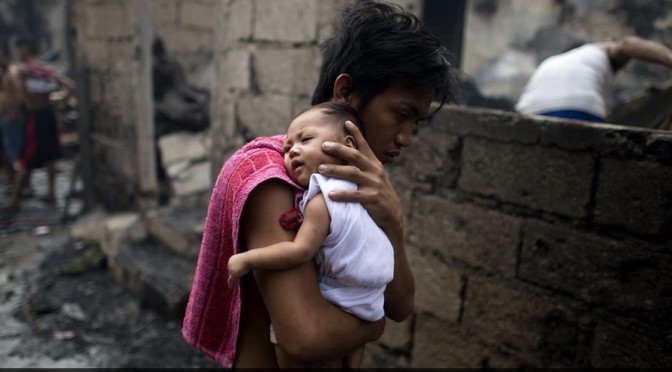 This is the human toll of urban gentrification/urban development mandated by IMF programs: a man & his child are headed to a basketball court turned into an evacuation center in the Tondo district of Manila, Philippines. In the fourth slum fire just in the past five weeks, thousands more were left homeless in an area targeted for development into swanky venues for the rich.

The Philippine government is authorized to clear out tens of thousands of slum residents all over Manila by December 2015 so the land can be privatized to suit IMF mandates & used for gentrification schemes. With no place else to go, residents are understandably resistant to being evicted, so it appears the Aquino regime is using the same method used in dozens of other cities & other countries: simply burning the shanties to the ground.

Fire forensics are seldom reported but fire officials theorized this latest fire on March 24th was caused by an unattended electrical appliance which torched hundreds of homes made of makeshift, flammable materials. We only wish that were persuasive but it isn’t–at least not to residents. Arson motivated by greed is the more likely cause & the least likely to be investigated.

The more important issue is why governments aren’t addressing the massive, global housing crisis which their policies, in league with IMF plunder programs, create for now over a billion impoverished people.