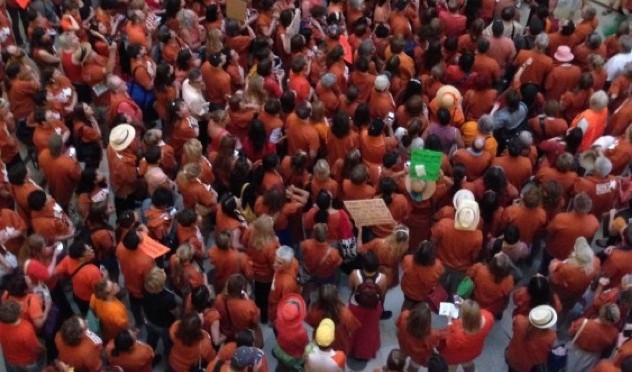 In July 2013, Texas governor Rick Perry, signed into law one of the most restrictive anti-abortion laws in the US. As of 2011, Texas women already must undergo a mandatory ultrasound (where the physician is required to play the sound of the heartbeat & describe the development of the fetus) & a 24-hour waiting period before getting an abortion. Under the mandates of the new law, abortions are banned after 20 weeks of gestation; the use of medicines like RU-486 to induce abortion are restricted; physicians performing abortions must have hospital admitting privileges within 30-miles of the abortion facility; & as of September 2014, all abortion procedures must be performed in ambulatory surgical centers.

As a result of all these restrictions most clinics providing abortion services have been forced to close down. By September 2014, only six abortion clinics will remain in the immense state of Texas.  And of course it goes without saying that poor working women will be the primary victims of this restrictive legislation.

Planned Parenthood & several other defendants sued to overturn two of the new provisions. Their legal strategy was to challenge only the admitting privileges requirement & that concerning the use of drugs like RU-486. The state of Texas was allowed to implement all of the law while it was wending its way through the legal challenge.

Yesterday (Mar 27th), a 3-judge appellate court ruled the Texas law was constitutional. The decision was something of a foregone conclusion. Judge Edith Jones, the conservative judge issuing the verdict for the court, has renowned herself for racism, opposition to abortion rights, enthusiastic advocacy of the death penalty. She once claimed Blacks & Latinos are “predisposed to crime” & “prone to commit acts of violence.” She has long been actively & outspokenly opposed to Roe v. Wade & has attempted to juridically challenge & overturn it. She also upheld the Texas sonogram law when it was challenged in 2012. Jones used all sorts of legalese blah blah blah to explain the court decision, but in legal proceedings seeking injunction against the new law, she’s the bozo who argued that if you drive fast a 300-mile trip to get an abortion is no big deal. They don’t come more stupid or more vicious.

Planned Parenthood has indicated they plan no massive protests against the appellate court decision. This is an election period where Wendy Davis (the state politician who filibustered the Texas legislature to obstruct passage of the anti-abortion law) is running for governor. Elections always impact mass protest in powerful & negative ways while people look to a savior to bring them their rights. There could not be a more bankrupt political perspective because it has nothing to show for it in over 100 years of experience.

What is needed is mass mobilizations of women from all over Texas converging on the state capitol in Austin to demand reproductive rights. A filibuster is a parliamentary gimmick but what is needed is an uprising. The forces opposed to abortion have been relentless since Roe v. Wade was passed in January 1973. They have taken a primarily legislative approach because they cannot win popular support for their views; the majority in the US support a woman’s right to choose if & when she will bear children.

In response, & regrettably, the abortion rights movement has taken an electoral approach to abortion rights & in those 41 years has only mobilized massively in Washington, DC on two occasions. Those two protests drew well over half a million people each. That is exactly what is needed in Texas & across the US since these state legislative initiatives have long existed & are now emboldened by the victory over abortion rights in Texas.

Mass mobilizations are not counterposed to electoralism & lobbying. Showing up to lobby in Austin or Washington, DC with half a million people trumps a handful of women beseeching politicians like beggars.

Abortion rights are human rights! Stand with the women of Texas! Don’t mess with our rights!

(Photo of women at Texas legislature in Austin protesting new law in 2013 from ThinkProgress.org)