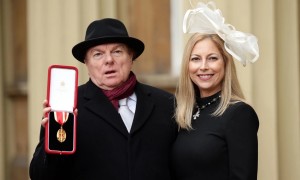 Fans of Van Morrison’s music will be appalled to learn he accepted his second knighthood. He was knighted into the feudal system by Betty Windsor last year & now received a second “sir” from Charlie Windsor. How many sirs does it take to make a dope?

They’ve always said about Van the Man that it was always about the music & that he isn’t political, though he grew up in the working class unionist section of Belfast. Everybody’s got politics; even eschewing politics is a form of it which usually signifies conservatism.

It can be all about the music for Van the Man. Who ever objected to his irascible nature when he sang so gloriously? But enough with the sirs! Quite frankly, feudal titles don’t suit a rebel but only a fool.